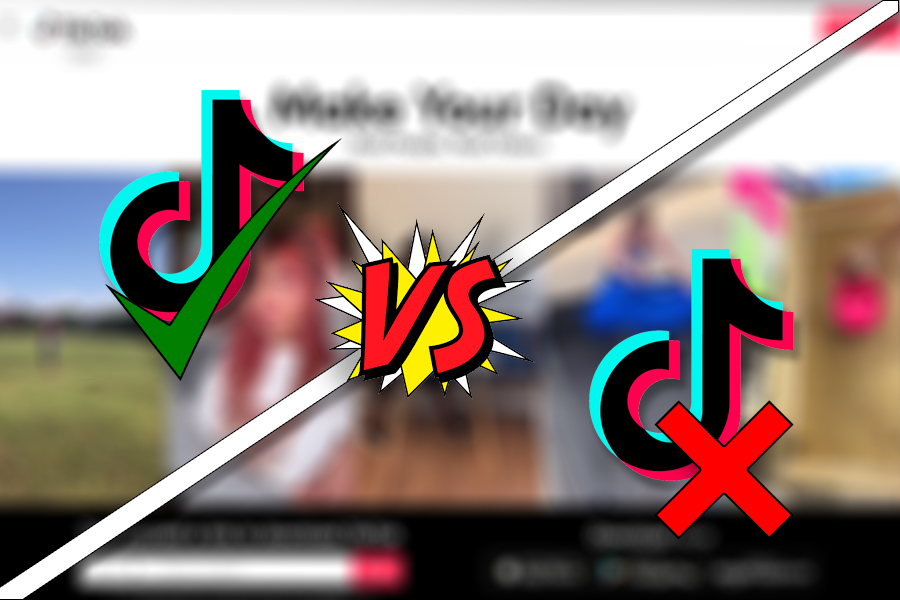 Is TikTok a new social media giant? Or is it a threat to social interaction as a whole? (Ryan Jayne)

Is TikTok a new social media giant? Or is it a threat to social interaction as a whole?

TikTok, the refined social media platform previously known as Musically, has taken over the pop culture realm of most teenagers today. Often an outlet for spare time, the app has becoming highly controversial. Today, two staff writers will express their thoughts and opinions over the next best, or worst, app in entertainment.

TikTok has changed dramatically since it rebranded from musical.ly. From its origin as a very niche app, it has spiraled to the cultural titan it is today.

It’s most dominant feature is being able to share videos with other people with it’s easy to use video editor and maker. The video maker is probably it’s biggest selling point as it has the filters, editing tools, and extensive music library to inspire many people to make videos. This makes it very easy for people to use the latest trending song for a dance or skit.The learning algorithm also tailors specific videos that users would want to see and enjoy. This algorithm is often noted as the reason for TikTok’s success, as it allows users to keep swiping and swiping through videos found just for them.

Its most unique feature of any social media app is that it is entirely music based. If you were a new artist today, the greatest marketing victory would be to have a song go viral of TikTok, as most songs that become viral on the app become viral on the radio and popular streaming services,

An example of this success would be the story of Sueco the Child. His song “Fast” blew up due to exposure from @lukasdaley, a popular TikTok skate account. It garnered attention which eventually led to an offer from Atlantic Records.

TikTok is also useful against the spread of misinformation. Due to the increased panic about the coronavirus, it makes sense that The World Health Organization has joined TikTok in order to battle the misconceptions surrounding the virus. Though this was implemented recently, other news sites such as The Wallstreet Journal and NBC News have also joined the app as a mean to inform others. It’s a great way to deliver information to generation Z teens about current events and politics.

TikTok is an app that has taken over pop culture, and you’d have to be living under a rock to not hear about it. Popular TikToks shown everywhere, even on other forms of social media such as Instagram or Snapchat. This app has shown up so much, it basically defines the current generation of teenagers. This has both positive and negative effects, but it seems that the children nowadays spend too much time either trying to make a living on TikTok, or simply watching too many videos on the app.

The app is developed by China, which also has control over the content and information for many of the users that are on it. Due to this, China also has control over what content gets posted, meaning that censorship is a massive issue on the app. Any TikToks that were created to degrade China are removed quickly after. Clearly, this is seen as an issue because it prevents a form of freedom of speech.

TikTok has a wide range of creators, and most of them seem to be female, although there are a lot of male creators as well. There are a lot of creators that make use of the app to “show off.” This could have, and already has, had a detrimental effect on the users of the app, who can have lowered self esteem, especially since nearly 50% of them are teenagers. This issue goes hand-in-hand with young creators trying to get views. Getting views and followers provides a sense of self-worth in young minds, and a lack of views or followers could lead to even more negative self esteem effects.