Highlights of the VMAs (a.k.a. the Beyoncé Concert) 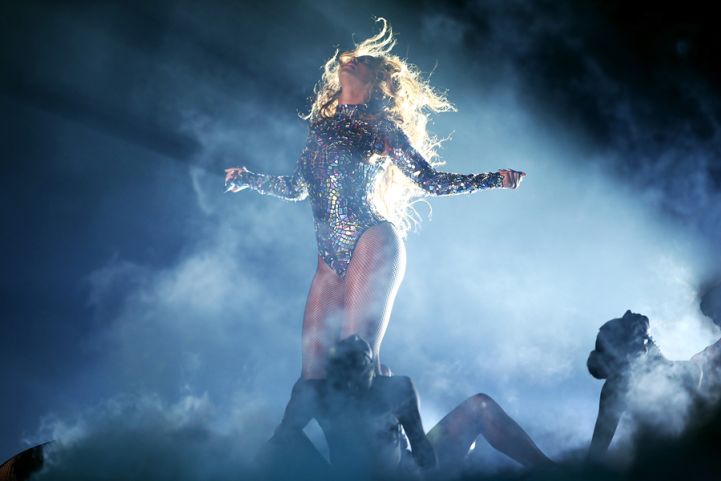 If the VMAs were a solar system, they would revolve around their sun: Beyoncé. Queen Bey was the talk of the town on Sunday night, and all others were stuck in her shadow. Here are the highlights of the show, or as I like to call them, “the moments that weren’t as important as Beyoncé, but still kind of important.”

“Break Free”/”Anaconda”/”Bang Bang” Medley. The show began with Ariana “Not-So” Grande performing her summer hit “Break Free.” Her song segued into Nicki Minaj’s sultry song “Anaconda,” with Nicki shaking what her mama gave her a majority of the performance. Finally, the two were joined by Jessie J to complete the medley by performing their smash hit, “Bang Bang.” Grande appears later in the show to accept the award for Best Pop Video.
Sam Smith’s Tear-jerking Performance of “Stay With Me.” The British singer-songwriter sung his heartwarming song “Stay With Me” at his VMA debut, and had the undivided attention of celebrities like J-Lo and Kim Kardashian. Performing with only a piano, a microphone, and a single spotlight, all he needed was his God-given talent and the audience was on the edge of their seat.
Moment of Silence for Ferguson, Missouri. Rapper Common led a touching moment of silence for the city of Ferguson, Missouri, the place where an unarmed, eighteen-year old African-American man named Michael Brown was shot and killed by police.

“Hip-hop has always been about truth and has been a powerful instrument for social change” he said.

Five seconds of quiet ensued shortly after he listed a few artists who use hip-hop as their canvas to paint compelling social messages.

Robin Williams Tribute. A brief, twenty-three second tribute to Robin Williams was shown featuring a montage of pictures of the late-great actor, soundtracked by Coldplay’s “Sky Full of  Stars.” Many believe that it was offensive, being that it was sandwiched between an award sponsored by Taco Bell and the TRESemme Style Check-In.
Miley Cyrus Accepts the Video of the Year Award. Cyrus showed up on the red carpet earlier Sunday evening with a date on her arm. Later in the show, we find out the mystery man is Jesse Helt, a homeless twenty-two year old Miley met at My Friend’s Place, a shelter in Los Angeles. He accepted the Video of the Year Award on Miley’s behalf, and used the opportunity to give a speech about homeless youth.

“My name is Jesse and I am accepting this award on behalf of the 1.6 million runaways and homeless youth in the United States who are starving, lost and scared for their lives right now,” Helt said. “I know this because I am one of these people.” Everyone was all ears that moment at the Forum.

MTV VMA Video Vanguard (Medley). The moment we’ve all been waiting for. Clad in a jewel-encrusted leotard, Beyoncé stole the show by performing a medley of songs from her self-titled visual album that dropped late last year. She began by performing “Mine,” “Haunted,” “No Angel,” and “Jealous” before things took a sharp turn for the sensual during her performance of “Blow.” “Drunk In Love,” “Rocket,” and “Partition” followed. Afterward, she gave a feminism-forward performance of “Flawless,” with the word “feminist” flashing across the L.A Forum screen. “Yoncé” ensued, and afterward, Beyoncé sung “Blue,” a loving song about her two-year old daughter, Blue Ivy. The screen behind the superstar showed an adorable Blue in several different scenes. Her voice was the soundtrack for the video, as she called out for her mother. For the final song of the night, she dedicated “XO” to her fans, who were glad to sing along. A teary-eyed Beyoncé accepted the award from Blue herself when she and daddy Jay-Z came onstage to present her with the Video Vanguard Award.  The three share a loving embrace, and Jay-Z  silences recent rumors of trouble in paradise when he steals a kiss and calls her the “greatest living entertainer.”

“I have nothing to say but I am filled with so much gratitude, and I just thank God for this moment.” she says.