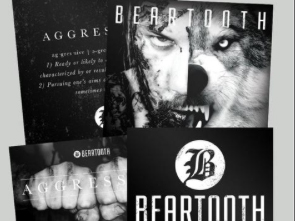 Beartooth is a Metalcore band that was formed in Columbus, Ohio in 2012. A year after the band formed, Red Bull Records signed them. The band consists of Caleb Shomo, Oshie Bichar, Kamron Bradbury, Brandon Mullins, and Taylor Lumley.

Aggressive, Beartooth’s second album came out June 3rd, 2016. When Aggressive first came out, many people were disappointed that the band didn’t keep the exact same sound as their first full length album, Disgusting, which came out in 2014.  A lot of Beartooth’s fans thought that Aggressive was a downgrade from Disgusting.

However, when I first listened to “Aggressive” I thought that the album was amazing, I wasn’t mad about the changes in the music because life is constantly changing. If there was no change in anything, the world would be boring.

Some of the instrumentals resembled those off of their previous album. Some of the songs sound like a combination of previous tracks. The instrumentals stay true to the hardcore rock/metalcore scene. Caleb’s vocals are always amazing, so I wasn’t expecting less. I wasn’t a huge fan the full 12 tracks at first, but after listening to it multiple times it grew on me.

This album had a lot of different important messages. Another thing that made this album was Caleb’s vocals. Caleb shows genuine emotion and depth through his vocals. In the song, “Rock Is Dead”, Caleb’s vocals combined with the song’s lyrics make it apparent that he’s frustrated with the current rock music scene.

Beartooth also really knows the makeup of their fanbase. “Censored”, Aggressive’s 7th track relates to rebellious teenagers often found in the metalcore music scene who want to be heard. Tracks like “Loser” and “Hated” target people who have been bullied or rejected, and the internal struggle of being bullied, being an outcast, and feeling essentially worthless due to being an outsider.

These tracks also discuss getting over bullying. “Loser”, more specifically covers discovering that your opinion of your worth is more important than what other people say your worth is. “But I’m learning my worth is more than your word”.

Out of all the songs on Aggressive, “King Of Anything” is my favorite. This song goes above and beyond the others and seems to describe Caleb’s  internal struggle with trying to be what other people want him to be.

He goes on to say that he is not above or below anyone. He’s human, and that’s what he wants to be. “King Of Anything” allows Caleb to let his fans know that they shouldn’t worship him because he’s human and he makes mistakes.