Should Music and Homework Combine? 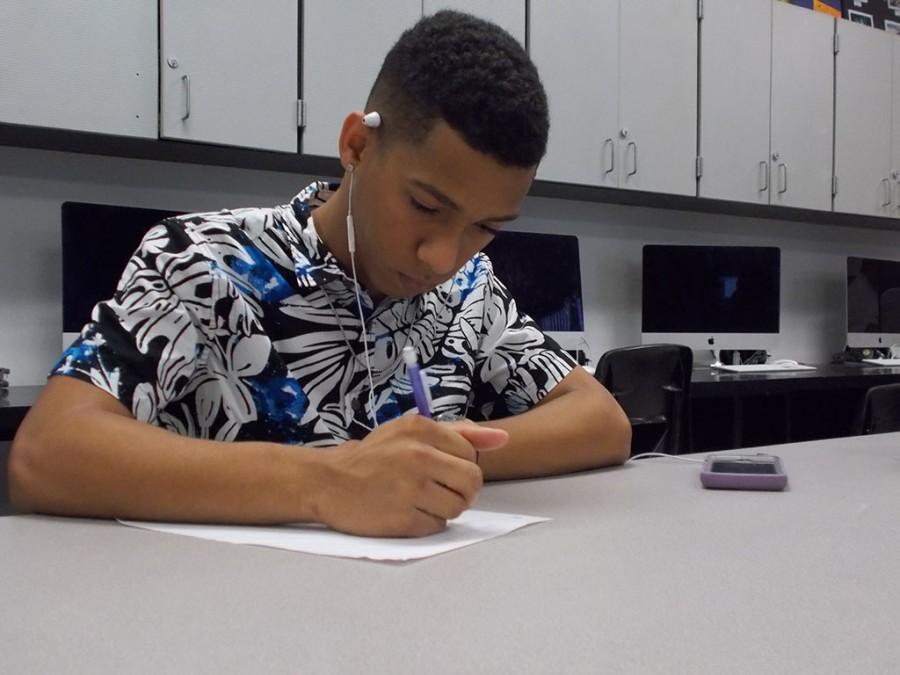 Students are often listening to music while they do homework.

Our world is filled with noise.

Many students are glued to their phones and iPods, often playing music so they’ll have company while they complete their schoolwork. However, does doing that really help them learn the material?

According to Sheela Doraiswamy of Mind the Science Gap, a website used by University of Michigan’s public health graduates to develop better communication skills, listening to music may or may not help a student concentrate on their homework. It depends on the individual.

“Students shouldn’t listen to music while studying,” said AP Psychology teacher Mr. Gray. “Because although some students need a distraction while studying, when they take the test, they are not in the same state because there is no music playing or the music is not the same, if there is music playing.”

At the University of Wales, a study was done about students working with different types of music and sounds. According to that study, listening to music like Adam Levine or Beyonce does not help students learn new material.

Don’t put those earbuds away yet. Scientists of another study concluded that results differ across the board.

“The students who took a test with music did have a lower average score than those who didn’t have music.” Doraiswamy writes in her article.

The researchers also noted that there was a variation in the scores. Some of the people being studied were shown to score higher or lower despite listening to songs with lyrics. So, maybe listening to “Happy” by Will Pharrell does help some people study.

For those who seriously have to have that background noise when they work, there are websites out there to help, such as MyNoise. It has a wide variety of noises available for free, and each sound comes with a description of where and how the sound was captured.

For those who don’t want to design a sound for themselves, another website to check out is Soundrown. Although it has a limited selection, this website offers the most popular noises. Users can combine sounds like fire with the sounds of the ocean to imagine a beach bonfire.