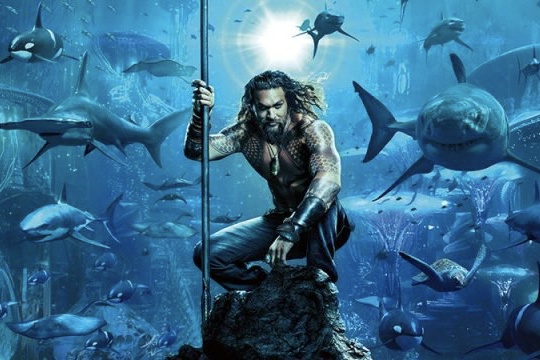 Did DC sink or swim with their latest movie?

Aquaman is the Warner Brothers’ most recent DC installment; it is rated PG-13, predictable and yet enjoyable. The movie surrounds a half-human and half-Atlantean man who after avoiding the sea for what seemed like an eternity, is forced to return to his mother’s homeland to prevent the biggest war the land dwellers and Atlantean alike have ever seen.

Starting with the visuals, the special effects are all up to par besides the very few instances where it is obvious that you are watching a computers rendition of reality. This ruins the experience and irks viewers like a broken nail snagging onto clothing. Specifically, the lighthouse backdrop during a sunset bothered me. It seemed very plastic even though sunset should be the most realistic thing in the movie.

The plot and characters are enjoyable and as I mentioned earlier super predictable. Aquaman saves his female companion (the princess of Xebel) several times. She fluctuates between damsel in distress to feisty independent woman. The continuous flux is frustrating to watch and takes away the stability of the character. Not to mention, her color scheme screams Little Mermaid with the red hair, fair skin, and teal outfit. The romance plot between Aquaman and the princess is awkward and uncomfortable, taking away from the story. On the other hand, the rugged looks of Jason Momoa are refreshing and offer a contrast between a typical full Atlantean. Black Manta follows a typical revenge plot and contains the typical scorn with a dash of hatred for Aquaman after their first interaction.

The jokes in the movie feel like an America’s Funniest Videos reel on repeat. That’s not to say that some didn’t manage to get a chuckle from me. The villains in the movie are well built and their motives for evil are never two dimensional along with their significant character development. However, the character development sustains the characters original impression on the audience. It is admirable how the environmental issues the ocean faces are delicately woven into the plot. The pollution and ignorant destruction of water known as environmental issues are reasons the Atlantean wish to destroy the land.

The storyline and plot overall are well built and the fight scenes are good quality. However, the amount is questionable and causes the fights to lose their charm and memorability. The plot offers us the entire on-the-brink-of-war tension with the excitement of a new enemy that Aquaman will focus on in the future (Black Manta). In other words, the creators left themselves a Segway to a sequel with Black Manta.

The movie itself directed by James Wan had a budget of $160-200 million dollars. Its been in the box office for four weeks and carries a 79% audience score as well as a 94% approval rating on Google. Even though this movie is subpar, it has proved itself to be one of the better DC movies according to its ratings. Aquaman paints a positive picture for future DC films.