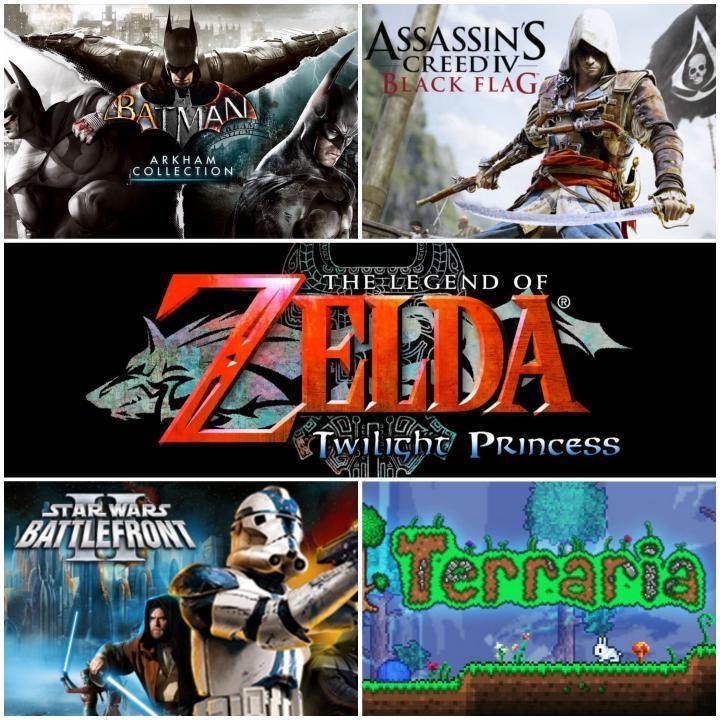 This particular entry into the Legend of Zelda franchise by Nintendo is especially dear to me because it introduced me to the world of gaming when I was a small child. For its time, this game had amazing graphics considering the time when it was released. However much I struggled to get through the game being an inexperienced child, each moment was thoroughly enjoyable and memorable.

By far my and many people’s favorite Assassin’s Creed, Black Flag seems to do just about everything right. It follows the classic AC formula to the letter and yet feels entirely different. The ship battles were the highlight of this game; the game mechanic that set it apart from all other AC games (even though AC3 had some ship combat, just to a lesser extent.) There is something about being a pirate sailing through the Caribbean Sea encountering enemy ships and exploring many islands that is rather engaging and entertaining.

From Arkham Asylum to Arkham City, Arkham Origins, and Arkham Knight, the series never failed to disappoint. It provides players with all of the satisfaction of being a deadly superhero while maintaining some level of adequate difficulty. The stealth, which is a major portion of the gameplay, is extremely satisfying. You can even hang people upside-down from gargoyles, talk about cool! Also, following Arkham Asylum, the other 3 games introduced a large open world in which players could glide around as Batman doing whatever they pleased. And to top the series off, Arkham Knight actually allowed players to ride the Batmobile which could turn into a tank.

This Star Wars game has been widely accepted as one of if not the best Star Wars game made to this day. Battlefront 2 took all that was good about Battlefront 1 and greatly expanded on it. Ultimately, this led to the innovation of better graphics and much smoother gameplay. Battlefront 2 also introduced the ability to play as heroes or villains from the Star Wars universe, which felt incredible being able to run around as Emperor Palpatine or Ki-Adi-Mundi chopping up rebels and droids respectively. The intense battles for capturing zones felt epic and altogether too real. Although those experiences were different back then since games now have drastically better graphics.

Although many may call this game a Minecraft clone, it is far from it. Throughout the years this game has been evolving and expanding. Terraria was a clear passion project; the developers of the game appeared to really care about the game and listened to the community, constantly adding new content in the for of loot, bosses, decorations, all a Terraria player dreamed of. I used to play this game constantly with my best friend as well as my family when I went to visit them in Cuba. This game holds a special place in my heart because of the fond memories it brings.

This is a very obvious choice for many reasons. While Minecraft’s concept is simple enough, what can be done with it is endless. Minecraft is the type of game one could easily pour hours into and not even notice. Just like many other games, it can be incredibly fun both alone or with a group of friends, all depending on what the player prefers. The generally calming music and satisfying mechanics for mining and building ultimately create an all-around mood that can only be described by one word: chill.

A massive game containing one of the best DLC’s up to date, the Witcher 3 is a true masterpiece. There is just so much to do in the game, you can easily lose track of time. At first, you plan to play for merely half an hour and suddenly you’re 3 hours in with no desire to stop playing. The story is compelling and the combat satisfying. This is one of my favorite games of all time; so much so that once I finished it I immediately went back and replayed it from the beginning with a higher difficulty level.

Currently, my most played the game on a daily basis. While it can sometimes be enraging to play against people whose skill is light years ahead of yours, it can generally be pretty fun, especially with friends. This game teaches you to quickly adapt to your opponent’s habits and exploit them in order to win. While it is similar to Super Smash Bros, Brawlhalla is much faster-paced. You are provided 2 jumps, 1 recovery, and a dodge, which tremendously increase the options you have to move around.

While this is not the most popular Call of Duty game, it is by far my favorite of the franchise, slightly above Modern Warfare 2. The increased movement that came with this entry into the series feels very nicely balanced. It fell in the sweet spot between Advanced Warfare’s far too jumpy movement and the standard of all other COD games before that. The boosted jumps and slides that BO3 provided made the game feel super fast-paced: it became the embodiment of everything I love about COD games. As the player, you fly through the maps bouncing off walls and sliding through windows and hallways always ready to quickly dispatch anyone in your path.

Another Star Wars masterpiece, THe Force Unleashed 2 lets you play as Starkiller, although his real name is Mareck. This man became Darth Vader’s apprentice and was trained to defeat Darth Sidious because of the Rule of Two. It is a bit disappointing that this game is not canon to the established Star Wars lore. However, that fact does nothing to diminish the wonderfulness of the game. The double light-saber combat and various force abilities are extremely fun. Additionally, the game has difficulty levels that can actually make the game challenging at times, especially when fighting enemies whose entire kit is focused on negating your force abilities.