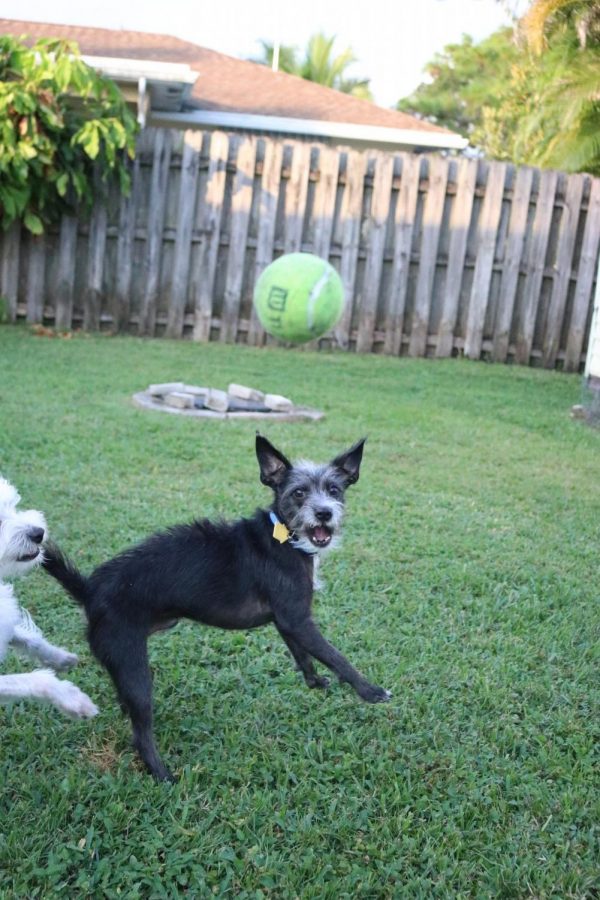 My dog, Luke, completely entranced by his ball.

I love dogs. And the outdoors. The dog park is my happy place because I get to see so many amazing little dogs that come and jump up on me and give me hugs. My dog, Luke, who is a good 12 pounds absolutely loves to chase around this giant inflatable ball that is at least twice the size of him. Occasionally he trips over the ball and does a few somersaults which always keeps me laughing for the rest of the day. All the other people around think it’s the funniest thing that this tiny little dog is so intent on tackling this giant ball and I just love seeing them take videos and laugh at him.

Like I said before, I love the outdoors. The weather has been so nice lately and I just bought myself a Razor scooter (because nostalgia, duh!) and I was able to fix up my old rusted bike. I love listening to music and riding down the streets in my neighborhood when the weather is nice because it’s both relaxing and exercise.

Dunkin’ Donuts sells pre-made iced-coffee at Publix, and to be honest, it’s probably the only thing that’s gotten me through this past year. I don’t like hot coffee, so being able to wake up, put some ice, pre-made coffee, and oat milk into a glass makes my mornings.

If you know me, you know I am a huge Swiftie. It may not be the trendiest thing to like Taylor, but you can’t honestly say that she isn’t talented. I’ve been a fan of hers since 2008, so whenever I want to feel nostalgic, I can throw in some headphones and listen to one of her first albums. Not to mention that she has released TWO new albums this past year, which means over 30 new songs to either jam out to or cry to –there’s no in-between.

5. Shows Meant for Children but are Really Good that I am Obsessed with as an 18-year-old

This, once again, might not be the trendiest or coolest thing, but these new musical children’s/young audience TV shows are great! High School Musical: The Musical: The Series and Julie and the Phantoms are two shows that I’ve been obsessed with over this past year. HSMTMTS even caused me to hop on the Olivia Rodrigo train before it was cool. There’s something so comforting about these shows–they might not have the best acting or most intense plotlines, but they’re so uplifting and nostalgic, which to me beats out dark and violent shows.

I love Kenny Ortega with my whole soul. As I mentioned before, I love these cheesy children’s shows. Julie and the Phantoms was directed by the one and only: Kenny Ortega, who also directed the High School Musical movies and Hocus Pocus, as well as choreographed Dirty Dancing. This man is iconic in so many different ways and he has the purest soul. I worship him so much that my phone lock screen is a live photo of him dancing and my friends even made me a custom Kenny Ortega calendar and shirt.

The songs that sound like they should be in an 80s coming-of-age movie are my jam. Both old artists and new artists have music in this genre. Songs like “Once” by Two Door Cinema Club, “Dance Hall Days” by Wang Chung, “Devils in the Canyon,” by The Strike, “I Love You Always Forever” by Donna Lewis, and literally anything by Bleachers are the definition of my music taste.

I recently got curtain bangs and my hair straightener has been very helpful in styling them.

Paint by Sticker Books are like paint by number books, but instead of paint, you use stickers. I’ve gone through three of these books (they each have 12 pages) and I’m working on my fourth. They are so relaxing and I love doing them while listening to music before bed.

I got a hammock for Christmas and it is the nicest thing ever! I love going out and laying in the sun during the day or sitting by the fire at night.