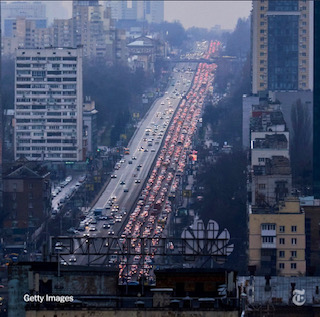 Picture showing a trafficked highway in Ukraine with people trying to Flee the country.

For the past fifteen years, Ukraine has tried to join NATO by obtaining a Membership Action Plan. But, because of the fact that Russia is a powerful member of the organization, NATO has rejected the admission of Ukraine multiple times. Ukraine being a NATO member would allow for more protection, as NATO members are forced to defend another NATO member if another country chooses to invade it.

Because of this, NATO and other countries don’t have to get involved in the Ukrainian invasion, as long as Russia decides not to invade a neighboring NATO nation, such as Poland.

“It’s terrible how countries will most likely choose to sit back and watch the conflict from afar instead of helping in some way,” one student says.

President Joe Biden has stated that the US has “no intention of fighting Russia,” but will support Ukraine in this conflict. The US has sent troops to countries bordering Ukraine, countries that are a part of NATO, in case Russia threatens to violate their sovereignty, as well.

“The situation is certainly frightening to witness,” one teacher says. “The world has cause for alarm with regard to Putin’s suppression of freedom, use of propaganda, and expansionist goals.”