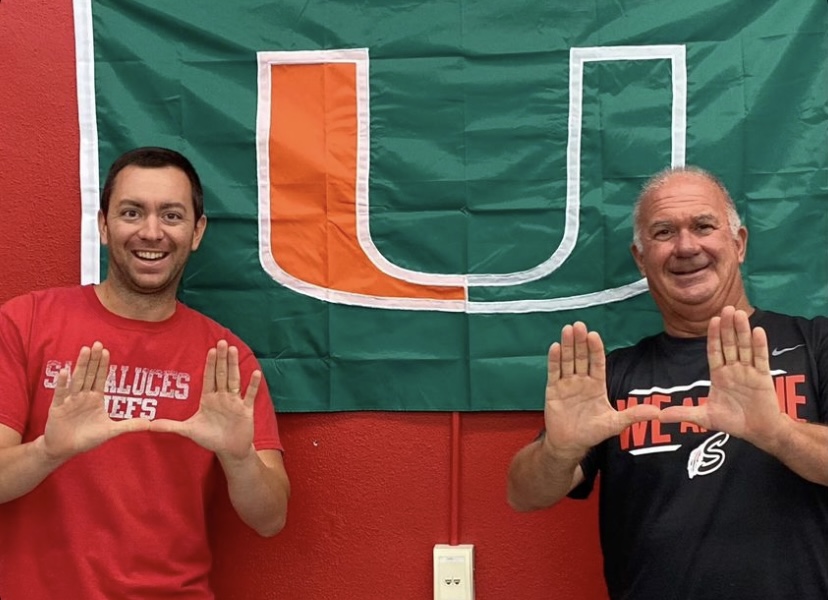 Mr. Snyder started working here at Santaluces at the beginning of this school year, working alongside his son, Dr. Snyder. We’ve decided to see if the phrase, “like father, like son” holds true to them, and compare what they do both in and out of school.

Dr. Snyder has been the staple for the Anatomy and Physiology and the AICE PE classes here at Santaluces; he’s a beloved teacher, but an even better person. But, teaching students wasn’t ever really his game plan.

Dr. Snyder majored in Exercise Physiology, now called Kinesiology, at the University of Miami. Kinesiology is the study of how the body functions when you’re exercising.

“I’ve always been into sports; I love sports,” he said. “When you watch as many sports as I do, you start to get into what makes an athlete great. Not only from a mental standpoint, but from a physical standpoint… You start to realize certain body shapes are beneficial for certain sports.”

Being an athlete himself growing up has always made him interested in the body, how it moved, and how it could relate back to medicine.

“I was a golfer growing up; pretty much every golfer that’s competitive, you know, as a chiropractor, it’s kind of a dangerous game to our backs.” Dr. Snyder says. “Because of that, I always wanted to be a chiropractor. I just kind of blended those together; I like chiropractic, I like the human body, and I like medicine.”

He graduated from chiropractic school in 2014, practicing for four and a half years after that. For him, teaching was the last thing on his mind, career-wise. Being a chiropractor to being a teacher is a huge leap.

“I had no desire to be a teacher… teaching was never on the radar.”

But, one of his best friends showed him that it could be a career that would fit him well.

“One of my best friends is a professor at Lynn [University],” he says. “He’s a therapist, so he teaches grad students in therapy. When you go to therapy, obviously you’re dealing with the brain, so he wanted someone to come in that could go over the anatomy and physiology of the brain.”

Dr. Snyder would come in and talk to his students about that topic. When he would come out of those lectures, he would realize how much he loved doing them. It also made him think about some other problems that he dealt with in private practice.

“The hours were long, I just wasn’t home as much as I wanted to be,” he said. “And then my wife got pregnant with our first child. I said, ‘I don’t want to do this, I want to be home more. I want to be a very active father.'”

After convincing both himself and his wife, he ultimately made the decision to go into teaching.

“I took a pretty massive pay cut to do it,” he joked. “But, I’m happy. I see my kids a lot, which I love, and I still get to do some chiropractic work in the summers, but that was kind of the move.”

He went to a teacher open house back in 2018. Santaluces happened to be his second interview, but the first one that had an Anatomy slot open. He took it, and now he’s been here for the past five years, and it doesn’t seem like he’s going to be leaving anytime soon.

“I don’t see myself going back to being a chiropractor full-time, since in the summers I dabble.” Dr. Snyder says. “The office and docs I used to work for, in the summer, they take that time to travel, so they bring me in because I know most of the patients since I was there for five years.”

He also talks about his family and how teaching gives him more time to be with them.

“I love being a father and being a husband,” he says. “I have three amazing sons who require a lot of energy and a lot of patience; if I’m not doing something related to work, I’m doing something with my kids.”

Dr. Snyder is also a believer in practicing what he preaches, which is something he tries to do with himself and his children. “I try to get them in the pool and swim every day, play some type of sport, go to the park, whatever. I also exercise every day, I go to the gym every day, I try to stay active.”

As stated earlier, Dr. Snyder himself is an athlete, his game of choice being golf. “I’m a massive golfer. My dad also is, so we try to go to the range or golf course once a week.”

If he’s not doing any of that, he does the classic American hobby of watching sports on the TV or in a stadium. “Right now it’s college football, we watch it on the TV or we go to games; I have seasoned tickets every Saturday.”

Dr. Snyder teaches classes that are primarily filled with Juniors and Seniors who are preparing to graduate and enter adulthood. This is something that he has to think about if someone ever asks him for advice in life.

“Find your passion, what makes you happy,” He says. “I have a lot of friends that went a certain route for a certain reason and are unhappy; the last thing you want to be is unhappy. The switch into education, like I said, I took a massive pay cut, but I’m happy.”

“Do whatever makes you happy, where you can wake up every day and be happy going to work; sadly most adults are not happy doing that.”

If you yourself are planning on going down the medical route, he has advice for that, too.

“As far as the medical route, first, take my class,” Dr. Snyder jokes. “Definitely do that.”

“But shadow. Shadow as many physicians or offices or different clinics that you can. There are many different avenues that you can go to in medicine. Find which one you could potentially see yourself doing, one that you enjoy.”

You probably saw the massive crowd surrounding the smartboard showing Minecraft during lunch for the promotion of the E-Sports Gaming Club during Club Rush, which happens to be sponsored by our very own Principle of Entrepreneurship teacher here at Santaluces, Mr. Snyder.

Mr. Snyder attended Ohio State University, majoring in Business Finance and Marketing. For 35 years, Mr. Snyder had his own insurance and financial business starting in 1984 with the Allstate Insurance Company.

He assisted in insurance for cars, homes, life, and many other products. He also earned a Security License and real estate license which helped his clients find homes and rental property around the same time.

He owed most of his success to his team as they “accomplished some of the finance and property casualty industries biggest awards.” He was so skilled that he was featured in a national commercial! The best part of his job was seeing his client’s life change from auto accidents, fires, floods, and other horrific situations to a recovery he promised to do.

Yet, he sold everything to move here to Palm Beach, Florida so that he could be closer to his family.

When asked about how much spending time with his family meant to him he replied, “Being able to spend time with the grandchildren is something that is priceless, because we all know kids grow up fast and then they are off to college.”

Even though he was done working in the business world, he still needed to work in order to be given insurance benefits, so he saw that teaching was going to be the best fit for him, which he absolutely loved to do. He knew it was the best way he could give back as he was an entrepreneur himself so his expertise on the subject could help students who desire to know about the world of business and finance.

He initially taught at John I Leonard but loved being with his son so much that he transferred from there to be with his son because “being with my son means everything to me.” It ended up being a great decision because his experience here so far has been fantastic as he “really loves everyone on this campus. From the best principal in the State Ms. Robinson, administrators, teachers, and students, Santaluces is now [his] home.”

The inspiration behind starting the E-Sports Gaming Club came from his experience teaching at John I. Leonard High School. He saw that many kids were playing video games by themselves and wanted to create a space for those who enjoy playing to play the games they love with other fellow gamers.

This club accumulated over 300 students which made it the 4th largest club in the United States. So, he decided to bring it to Santaluces, and now over 80 students have joined in just two weeks!

Outside of school, Mr. Snyder loves spending time with his grandkids, going to football games, and playing golf with his son.

Mr. Snyder advises anyone with a desire or passion, to go to college as long as it doesn’t require a degree such as learning a trade or becoming a real estate agent. He is very passionate about the business aspect of each profession, which is why he hopes to teach kids that no matter what field they are in, they should strive to be their own bosses.

Yet with all these accomplishments and goals, Mr. Snyder still wants to stop learning, and even at the age of 60, he will earn a Master of Education Leadership to become an Assistant Principal.