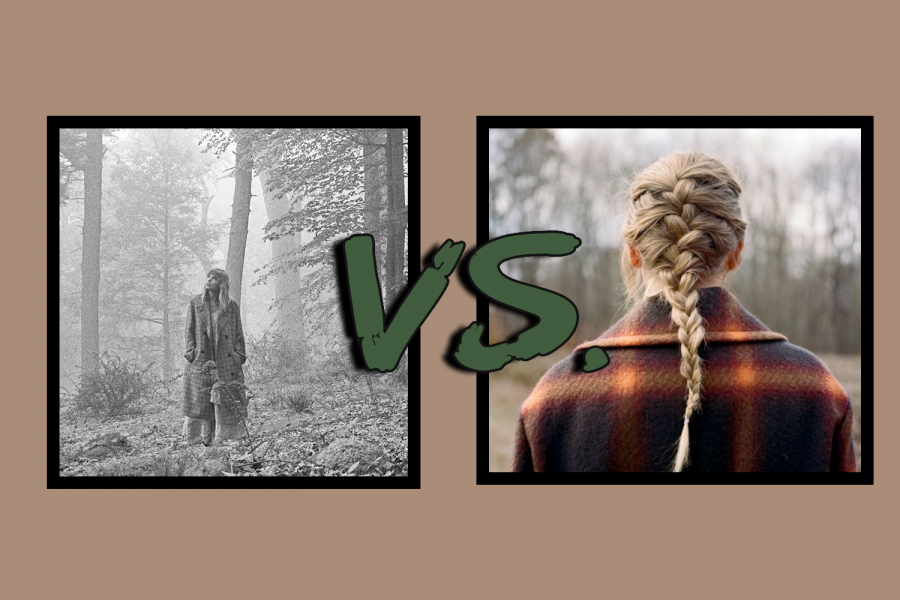 Folklore vs. Evermore: A Track by Track Comparison

After releasing folklore‘s sister album, evermore, Taylor Swift’s two most recent projects have been under many comparisons. In this story, Sabrina and Kylee will highlight which tracks stand out the most.

Track One: the 1 vs. willow

The 1 has a beat that reminds me of the earlier Swift days when she wrote the number 13 on her hand and lyrics down her arm.

I would choose champagne problems over cardigan any day of the week.  Mostly because I enjoy Swift’s higher notes in champagne problems but also the storyline is ambiguous as to whether she is talking about herself or thinking from someone else’s point of view.

The last great american dynasty has to be on my top ten songs the first time I heard it so it takes the crown here. However, gold rush has a really good pace throughout the song that I appreciate.

Exile and ‘tis the damn season are so different when comparing them side by side. What sells me on exile is Bon Iver. The connection and lower octaves used for this song are blissful. Their voices together create such a dynamic piece that I love.

Track Five: my tears ricochet vs. tolerate it

Both of these songs aren’t really my cup of tea but if I had to choose, tolerate it would be my choice.

Track Six: mirrorball vs. no body, no crime

No body, no crime has my heart because of the country-pop sound that the song shocks you with in addition to the fun storyline. Although bonus points to mirrorball for making me laugh at the fact she had to use ‘mirrorball’ instead of disco ball.

Happiness hits a little differently than the rest of the songs in the last few albums and how her other songs make me feel. I truly enjoy happiness over seven. Also, I really think the melody of seven doesn’t catch my ear as much as I want it to.

Hands down, august wins this round.

Track Nine: this is me trying vs. coney island

Neither one of these songs really stand out to me, however, coney island has a decent chorus and it’s a collaboration.

Ivy has this amazing line, “my pain fits in the palm of your freezing hands” that gives me shivers. Such a great visual paired with having to truly think about the lyrics sell me.

I love the story invisible string creates. This idea that we can have love that doesn’t seem super right but there is this invisible string holding the two together. The idea that two people are meant to be is cheesy but very fun to think about.

Long story short is filled to the brim with a whole bunch of idioms that are used to teach lessons. The irony of this and the title creates a duality that beats mad woman.

In all honesty, I love Taylor Swift and she has an amazing talent. However, both of these songs are on my least favorite list and I won’t choose because I really don’t like either of them.

Betty. I don’t think I have to justify this one.

For the most part, I knew what song I liked more than the other for the rest of this list, and then I got to the last track of each album.  I was surprised when I realized that I enjoy peace the most out of the three. Evermore is literally the name of the second album, so I knew that it was going to be good, and it is but extremely slow. I also really enjoy the chorus of hoax but peace just hits differently after listening to it again.

Track One: the 1 vs. willow

Both tracks have very unique sounds compared to Swift’s previous works, but the melodies and the small atmospheric echoes in the background of willow put it above the 1.

Although I love cardigan as the introduction to Swift’s new era, champagne problems is both beautiful and heartbreaking, therefore the winner of the track 2s.

These tracks are both so amazing in different ways, with the last great american dynasty telling a fascinating story and gold rush going through a rollercoaster of vocals. I honestly cannot pick a favorite, but for the case of this story, I will say gold rush gets the win.

’tis the damn season is an interesting track full of great storytelling and nostalgia, but it’s definitely a grower for me. Between Swift’s and Justin Vernon’s vocals and layers, exile is the winner.

Track Five: my tears ricochet vs. tolerate it

Swift’s track 5s are known to be some of the most emotional and vulnerable of her entire discography. However, neither of these tracks live up to the ‘track 5’ title for me, personally. That being said, my tears ricochet has a beautiful power to it, putting it above tolerate it.

Track Six: mirrorball vs. no body, no crime

These tracks are both so different which makes it extremely difficult to choose between them. mirrorball really resonates and connects with me, but no body, no crime has such a cool storyline with a country twang. I’m not sure which I like better, but because I have a more emotional connection with mirrorball, it’s the winner.

Although the themes explored in seven are both fascinating and heartbreaking, the beauty and reality of happiness beat out seven.

august is one of my favorites out of Swift’s entire discography, therefore automatically putting it above dorothea.

Track Nine: this is me trying vs. coney island

Swift’s track 9s are always a favorite of mine, but coney island lacks the sound and lyricism that this is me trying and the rest of her track 9s have.

The instrumentation, vocals, and overall vibe that ivy has is the definition of my kind of music, while illicit affairs is a little boring for my taste.

To be honest, I was really excited to hear cowboy like me, but I was pretty disappointed during my first listen. invisible string is so pure and happy, which makes it my favorite.

betty is one of my favorites off of folklore, and to be honest, there’s not much that can top it, not even closure.

Once again, the combination of Swift and Vernon’s vocals beat out the other songs. evermore is so stunning and powerful, unlike peace and hoax.