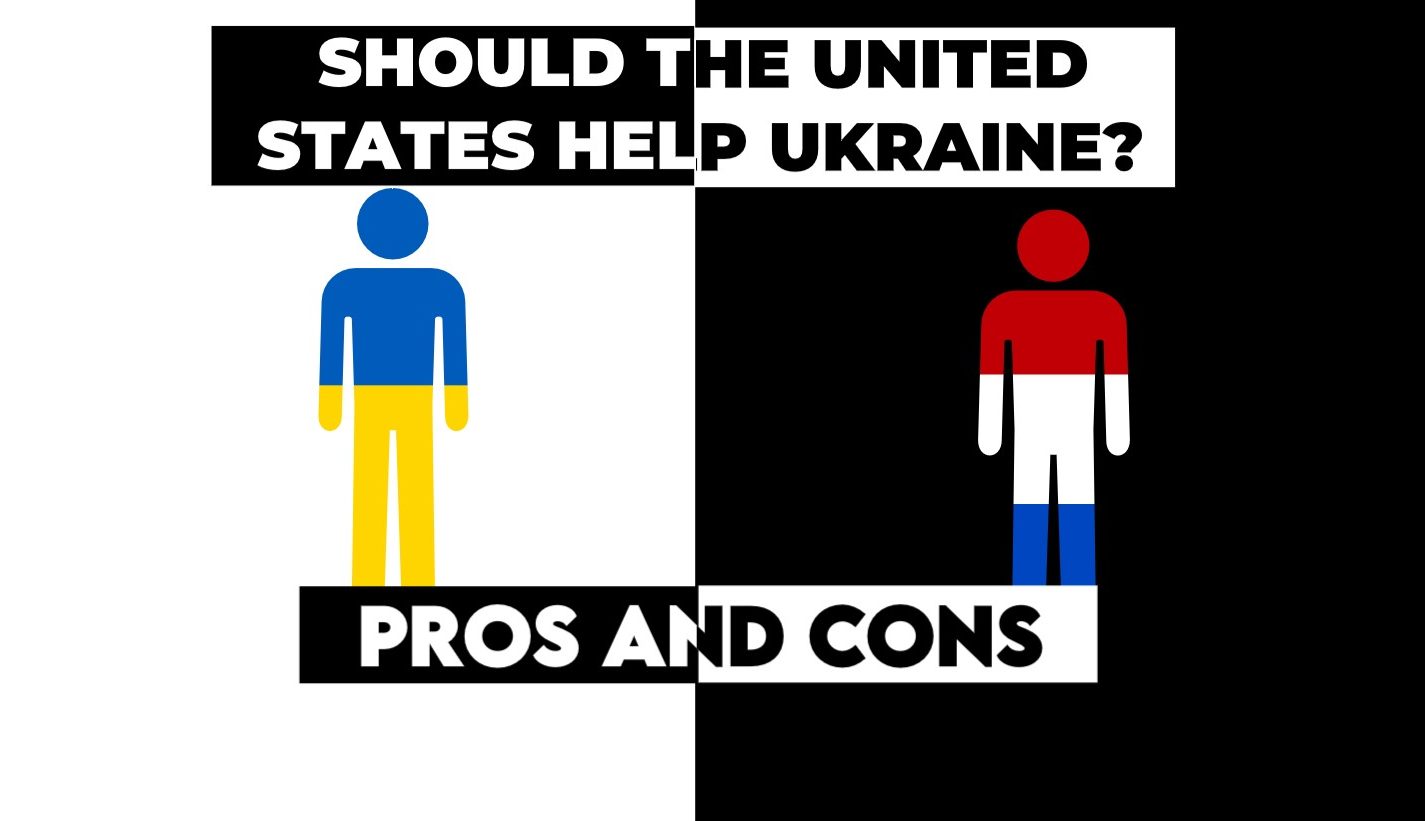 Welcome to the Santaluces Standoff, where we address relevant topics with opposing views.

Today’s topic is the situation in Ukraine and whether the US should be doing more to help. While many of us have felt the effects of the invasion at the gas pumps, the majority of us have also felt the situation weighing heavily on our collective conscience. Peaceful citizens are fleeing their homes, some being murdered by Russian troops while trying to escape. Seeing this horror play out every day in the media begs the question: isn’t there something more we can do?

Why the U.S. Should Do More to Help Ukraine

“The U.S. should get involved because we are strong enough to help and we have the resources to help.” —Jenn, Sophomore SHS

“Past events have shown that the support and power the U.S. provides have the ability to turn the tides of war. Ukraine is just one of the many countries that needs that support and power.” —Christopher, Senior SHS

“The U.S. needs to get involved before Russia gains too much power and their aggression becomes too powerful a force to stop.” —Alex, Freshman SHS

“Russia has an overwhelming amount of strategic tactical and military advantages over Ukraine right now. The U.S can help get Ukraine out of this vulnerable spot with their weapons, support, etc.” —Zaria, Junior, SHS

“If the U.S. sits down with NATO and gets their support, then yes, the U.S. should get involved.” —Brad, Sophomore SHS

“Yes, the U.S. should help. Isn’t this the message of every great movie: ‘Help out the underdog’? We can rally behind this message.  —Alaina, Freshman SHS

“Yes, the U.S. should help the Ukraine because it’s in their motto to help others. The benefit of this is it would form less tension between one another.” —Mario, Sophomore SHS

“To get ahead of the evolving conflict, the United States and its allies should also focus on getting Ukrainians the tools they will need for urban warfare against occupying Russian forces.” —Rianna, Sophomore SHS

”The U.S. could gain mainly potential benefits from helping Ukraine, past events such as the Marshall Plan has helped build the U.S. reputation.” —Pedro, Junior SHS

“The US is known for helping countries in need. If we have the resources we should help out.” —Selena, Junior SHS

“Giving Ukraine weapons is essential to achieving a peaceful, political solution because the Kremlin will know the cost of further military action is high, paving the way for a stalemate and peace.” —Rachelle, Junior SHS

“We should help Ukraine because there are literally so many innocent lives involved.” —Selina, Junior SHS

“Since Ukraine regained its independence in 1991, it has been a good partner for the United States on issues that mattered critically for U.S. foreign and security policy. For example, in the early 1990s, Ukraine gave up the nuclear arsenal that it inherited following the collapse of the Soviet Union.” —Kenny, Senior SHS.

“The U.S. and Ukraine relationship serves as a cornerstone for security, democracy, and human rights in Ukraine and the broader region.” —Kenzaria, SHS

“We should help Ukraine because they need all the help they can get right now.” —Makayla, Junior SHS.

“We should help Ukraine because they need a lot of supplies and a better support system. U.S. has a strong army that could help them through the battle.” —Giana, Freshman SHS

Why the U.S. Shouldn’t Do More to Help Ukraine

“The United States has far too many domestic problems to be involving herself in foreign affairs.” —Mason, Senior SHS

“Europe is better fit to help Ukraine than we are; we should focus on other issues such as domestic problems or Taiwan.” —Anthony, Junior SHS

“The US has its own issues in her country. Starting another war isn’t going to help right now.” —Kandaci, Junior SHS

“The U.S. cannot afford to be weakened or distracted from the threat of China.” —Ashley, Junior SHS

“The U.S. already has its own problems and battles going on so with us helping out another country, that’s just putting more problems on the U.S. citizens that probably won’t be resolved.” —Ma’ kiyah, Sophomore SHS

“Russian President, Vladimir Putin, has already spoken and warned other countries to not interfere in this war. Interfering would only have negative outcomes for the US.” —Jessica, Senior, SHS

“The U.S. involving themselves could escalate the issues and cause issues in other countries.” —Dana, Junior SHS

“The U.S. getting themselves involved could lead to great tensions between Russia, which isn’t a good idea considering how powerful they are.” —Mario, Sophomore SHS

“The U.S has already helped Ukraine economically in the past, there is no reason for the U.S to be getting involved” —Nayaly, Sophomore SHS

“The U.S getting involved attacking russian troops will possibly lead to a world war leading to even greater conflict.” —Trace, junior SHS

“The U.S. also refused to provide advanced weapon systems to Ukraine, such as Patriot anti-aircraft missiles or Harpoon anti-ship missiles, because it determined that Ukraine’s armed forces were not sophisticated enough to handle them.” —Anan, Sophomore SHS

“The U.S. could face consequences for being involved, especially if Russia let’s all hell go loose and gets nuclear powers involved.” —Pedro, Junior SHS

“If the US gets involved in the conflict between Russia and Ukraine, it could cause serious problems and possibly lead to World War III, which could be the end of humanity, because nuclear weapons are too advanced, and the consequences of multiple weapons being used in a conflict would be catastrophic.” —Tcheranda, Junior SHS

“The U.S should not be involved because it will take years to shore up Ukraine’s beleaguered military, making it uncertain that a delivery of arms would establish parity immediately.” —Dwindy, Junior SHS

“The provision of arms won’t knock the Kremlin off its course in Ukraine and instead will bring the U.S one step closer to a direct military confrontation with Russia” —Rachelle, Junior SHS

“The U.S doesn’t want to be involved with the Russians causing a war because Biden thinks it could potentially lead to a global war,” —Kendra, Junior SHS

“If the U.S. helps Ukraine, Russia might take actions and could lead to the start of another World War.” —Brayden, Senior SHS

“The U.S joining would cause a lot of problems and tensions towards Russia, and it will put us in risk for a world war.” —Eman Junior SHS

“We should not help out because countries need to start fighting their own battles.” —Khaleel, junior SHS

“We should not help because if the US gets involved then Russia will attack the US. Nobody here wants war so it’s best if we just let them be.” —MaKenna Falcon, Senior SHS

“The United States should not help Ukraine because it can start problems with the U.S and then can start a whole World War III.” —Wilkenson, Sophomore, SHS